Methodists Planted East of the Railway

Forget Fleetville, the adventurous souls who first inhabited the district settled in the homes of the Cavendish estate, and it didn't take long for a few shops and a range of employment to spring up.

Meanwhile, the non-conformist city churches began to explore new locations in which they could provide a mission for new residents.  In 1894 the Dagnall Street Methodists launched their mission in Cavendish Road; initially front rooms and open spaces where houses had not yet been built; then meeting in Lee's small shoe manufactory, formerly a harness maker's shop and later to become the workshop of Butler's Motor Garage.  For a few years both the adults and the Sunday school would worship among the part-made boots and the smell of shoe leather ...

...Until a corrugated iron Nissen-style building was acquired on a narrow plot in Hatfield Road* which the members could fit out for permanent use.  As far as this group was concerned the dawn of the twentieth century offered a sparkling future.  However, not content with what they already had, this Methodist branch moved on and secured a site nearer to the heart of Fleetville, on the corner of Glenferrie Road.


Initially a multi-purpose hall and Sunday school room in more temporary accommodation it was at Glenferrie Road that the Methodists set their roots down permanently. 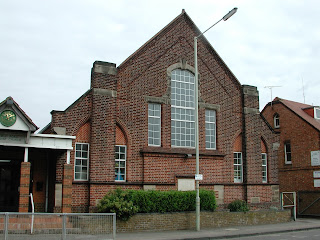 They have reached a significant milestone now that the new little suburb they joined in 1894 has expanded to become the city's largest and most vibrant district.  Next week Hatfield Road Methodist Church will be celebrating its 125th anniversary in Fleetville – for although that name traditionally belonged to the little area around the original print works (now the Morrison's site) the name could be applied to anywhere hereabouts, from Beaumont Avenue to The Crown, and is included in two wards, Ashley and Clarence.

We wish the Methodist Church a happy anniversary and hope that their tenure in Hatfield Road remains for at least another 125 years.

* Acquired by the Camp Liberal Club which later replaced the corrugated building.  This same building is now Hatfield Road Sports & Social Club.
Posted by Mike Neighbour at 15:00 No comments:

What's That in the Background?

Every so often you come across a photograph with so much detail it is difficult to take it in immediately.  As an example, I was given this image about ten years ago.  So many readers will be familiar with the location, near the junction of Hatfield Road and Sutton Road.  The scene was captured in 1939.

On the opposite side of the road is the original laundry attached the cottage with bay windows.  At the time the laundry also possessed a fenced front garden with the door accessed along a narrow path.

Then there is the huge former printing works which had become the Ballito hosiery mill and about to be converted to munitions manufacture.


Of course, the reason for the photo, probably taken by a member of the Tuck family, was to feature son Brian on the trike, together with his friend Alan, whose father Leon Turner owned a grocery shop opposite.  The hoses are prepared for the next motorist to pull up for a few gallons of petrol from Mr Tuck's little garage and service shop next to house – the bay window on the left of the picture.


London Transport had been operating bus services along Hatfield Road for six years and one of its standard shelters stood back from the road against Ballito's front wall; and the old-fashioned torch logo warning of the school ahead.

But there is something else in the view which, after a decade, I have just spotted for the first time.  In 1931 St Albans Police Force introduced a small number of timber police boxes, so that, in the growing city, patrolling officers would not need to walk back to Victoria Street to complete details and sign off.  Six of them were installed, fitted with electric heaters and a telephone which could also be used from the outside so that residents could make emergency calls.

We know what they looked like, as we have a photograph, above.  Now, looking carefully in the background of the main picture, can you spot a police box?  It is standing on the corner just inside Sutton Road on part of Ballito's site.  Look just to the right of the hat of the departing pedestrian!

When the wooden boxes were replaced with brick versions in 1939, the site was moved to the Hatfield Road/Beechwood Avenue junction.  So few of us will recall the wooden box as shown in the photograph.  Nevertheless the proof in this image shows it was there and adds to the stories of the local police service and communications in the early days of easy access to phones, for regular as well as emergency calls.

We sometimes need keen eyes, or a magnifying glass.

Posted by Mike Neighbour at 16:47 No comments:

Living along the lane

The title sounds very rural, doesn't it?  And so it once was: narrow, hedge-lined and with surrounding fields.  Not an ancient lane, it was created for the use of the public and the benefit of the estate owner who did not wish outsiders passing along the drive past his big house.

The lane in question is Marshalswick Lane; the sponsor was George Robert Marten and when built in 1854 it was first given the name of New Lane, because that's what it was.

The writing for the lane was on the proverbial wall when the estate and its farms began to be dispersed to developers in the 1930s.  Which is when homes in Marshals Drive first began to appear, together with individual development on the the south side of Marshalswick Lane.  You could say, this was the quiet part of the area's growth.  The lane remained narrow,  unmade and hedge-lined.  Even when the new Nash estate homes began in 1939, from a turning off the lane at a new road called Ridgeway West, change was false-started because of World War Two.

Among the new residences completed on the north side before building stopped were those west of Ridgeway West.  At this time no building had taken place on Chalkdell Farm, so the hedges along the lane remained – for now.

When building re-started in 1947, other starts joined the homes: large blocks of flats, a shopping centre, and eventually the widening and improving of the lane and the five ways junction known as the King Will, the name of the public house on the corner.  The lane became part of the city's ring road, and ring roads tend to get very busy.

For the most part the owners of the homes appeared pleased with their locations, and over the years there has been a succession of home improvements, for which we should read home enlargements, even complete rebuilding.

A rather different approach was considered by a group of neighbours in 1972. The then owners of numbers 71 to 79 decided that life along the lane had become too busy, too noisy, too congested.  They devised a plan to have their homes pulled down and have a three-storey block of flats built in their place, and although the Herts Advertiser did not specify, presumably the number of flats would be rather more than five!  This would enable each of the group to share in a good-sized portion of the land sale cost.  One of the number was quoted: "we think we can realise enough to enable us to buy new homes in the sort of area where we want to live – the sort of place this used to be."

The aspiration of living in a nice house with a view and in a quiet location: everyone's dream, but not realisable by all.  Had the proposal been given planning approval – which it was not – it is likely that the owners' new dream location would be shattered once more as others, and still more, joined them.

The houses, much altered today, remain.  The simplicity of their. original design has changed in all directions over the years, but none has fallen for replacement flats.  The owners can at least say that they live along a


lane.  Just ignore the standing traffic waiting to reach the King Will.
Posted by Mike Neighbour at 17:46 No comments:

About 'St Albans' Own East End'

Mike Neighbour
St Albans' Own East End is an exploration of the city's eastern districts, with feature chapters on the landscape, the hamlets, and human transformations during the last millennia. The core of the book is a chronological survey of everyday life from 1880 to 1960. Volume 1: Outsiders, published March 2012. Volume 2: Insiders, to be published in 2013. www.stalbansowneastend.co.uk