Among the photographs recently loaned or given to the author are one or two stunning subjects sent in by Darren. 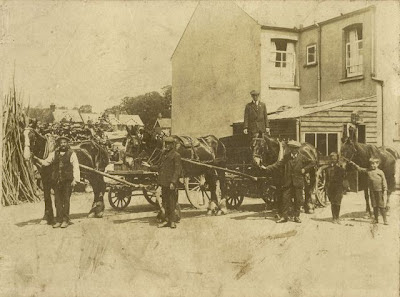 First, are two great studies for J H Stanton and Son, who ran a wood business in Castle Road.  As I understand it, there is a distinction between wood and timber; in that the latter has been cut and prepared for further use, whereas wood has been cut from the tree but otherwise not seasoned and cut to size.  I am sure there will be readers of this blog who will correct me if I am wrong.  In the photograph shown is a stack of wood, and there are logs lying around.  The company also described itself as a wood merchant.

The firm was based at number 84 Castle Road, and also occupied the space where the newer houses on the corner of Burleigh Road are, as well as the yard that later became St John's Ambulance Brigade site, behind the house.

John Stanton came to St Albans around 1907 and lost no time in setting up his trade, although he began by working at one of the many gravel pits in the area.  The company was still in business in 1960, according to the Kelly's Directory of that year. 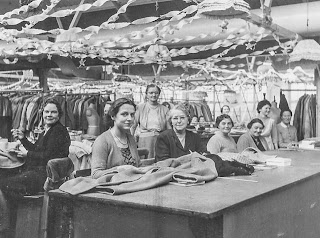 Next we turn our attention to Peake's, a quality clothing manufacturer in Hatfield Road, opposite Clarence Park.  Neither the firm or its buildings are there now, but  memories of former employees abound.  However, there are too few photos, both of the buildings and the people engaged in their normal working tasks.  Fortunately two pictures were received recently by Sheila, whose mother was employed by the firm in the 1950s.  A larger version of this picture will appear in the group pictures page of the website; you may recognise a relative of yours, and if so the author would be eager to hear from you. 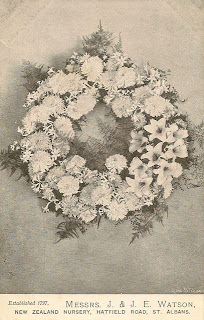 Finally, a postcard tracked down by Andy, arrived in the post.  A wreath forms the pictorial element of the card, but at the bottom is printed:

This address covered three different sites.  The main nursery was alongside Lattimore Road on part of what is now Loreto College.  They also had a site where the Cavendish estate was eventually built, and they used land at Smallford.  A definitive explanation of the name New Zealand in the firm's name is still being sought.

At Fleetville Diaries we are looking forward to our next guided walk on Wednesday evening (for details, see the Fleetville Diaries website – it is essential to book as the number of places is limited to 25).  We will be perambulating along some of Fleetville's roads to discover how the developments took place and who lived where.

Finally, the long-standing question of the speedway track at Smallford has at last been confirmed.  The 1937 large-scale Ordnance Survey map shows the track circuit, together with a structure which may have been a modest grandstand, halfway along the eastern side – although "grand" is probably too grand a word for its possible size.  Entry to the site was from Hatfield Road, immediately to the west of the long and narrow Popefield pond alongside Hatfield Road.  The site may still be seen from Google Earth.  Find Popefield Farm; then locate Nottcuts Garden Centre.  In the space between can be seen the distinct shrubby rectangle of the track site.  Perhaps a field walk in Ellenbrook Fields Country Park may reveal some surface evidence of the stand and trackway.

About 'St Albans' Own East End'

Mike Neighbour
St Albans' Own East End is an exploration of the city's eastern districts, with feature chapters on the landscape, the hamlets, and human transformations during the last millennia. The core of the book is a chronological survey of everyday life from 1880 to 1960. Volume 1: Outsiders, published March 2012. Volume 2: Insiders, to be published in 2013. www.stalbansowneastend.co.uk